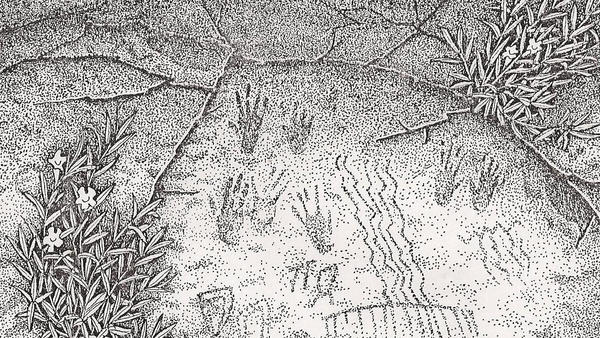 The inland southern California area has been occupied by native American groups for thousands of years. Both the Cahuilla and Luiseño Indians probably used the Motte Rimrock Reserve land and surrounding areas as late as 200 years BP. Six archeological sites were identified in a 1981 survey by D. F. McCarthy and colleagues. The sites contain remnants of milling stations, rock shelters, and subsurface deposits. Three also include detailed rock paintings.

One site offers a particularly rich assortment of cultural resources. Listed with the National Register of Historic Places, it is thought to have been a Luiseño religious center. Six boulders are covered with a variety of designs, including, most hauntingly, the reddish-brown prints of small human hands. A detailed study by local pictograph researcher Steve Freers reveals the presence of finger prints. Some panels of pictographs at this site are considered to be among the best preserved in Southern California.

McCarthy (1991) suggests the site may have been used for various ceremonies, including the Luiseño girls' rites of passage. Upon puberty, these girls took part in a ritual revealing their place and purpose in life. At the conclusion, boulders were painted with a variety of designs and marked with the handprint of each initiated girl.

The Motte Reserve has expanded threefold since 1981.  New sites are likely to be discovered, inviting additional research.

Start your #mottereserve journey today.
Let us help you with your search